About the Police Office 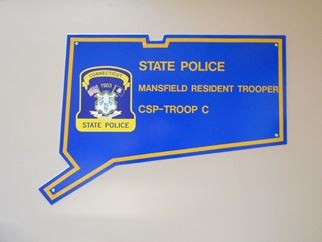 The State Police is responsible for providing law enforcement coverage, including patrol services, in 81 towns that either do not have an organized police department or have agreed to let the State Police supervise their police officers or constables. It provides the coverage through 11 troops operating from barracks across the state. Each troop is responsible for several towns. Normally, officers are not assigned to work exclusively with specific towns. Thus, some towns opt for law enforcement coverage in the form of state police officers stationed in the towns and working exclusively for the towns (i.e, Resident Troopers).

The Troopers assigned to Resident Posts work in conjunction with Troopers on patrol from the barracks in Tolland.

The Mansfield Resident Trooper's Office is currently employs the largest number of Troopers in the State of Connecticut. There is one Sergeant and seven Patrol Troopers currently assigned to the Town of Mansfield. The current patrol configuration has at least one Trooper scheduled 24 hours a day 365 days a year. Troop C in Tolland, the home Troop of Mansfield, provides supplemental Patrol Troopers on each shift and also has a dedicated Patrol Trooper assigned to the Town of Mansfield on every evening shift plus Friday, Saturday and Sundays on the midnight shift. The Troopers responded to 18304 calls for service in 2020, investigating over 392 criminal complaints, investigated 221 motor vehicle accidents and handled thousands of other calls for service.

The Troopers assigned to the Office currently sit on numerous committees to include Youth Services, Senior Center, Town Gown and several others.

For emergencies please continue to call 911. For regular police business the Mansfield Resident Troopers can be reached at 860-429-6024 or by calling Troop C at 860-896-3200. Unanswered regular business calls will be forwarded and answered by Troop C in Tolland.

The Mansfield Resident State Troopers Office has set up a "Tip Line" to give the community a way to make the police aware of any suspected criminal or drug activity within the town of Mansfield. Anonymous tips will be received but please be specific with the information. Residents may send TIPS ONLY emails to police@mansfieldct.org